You might have heard – there was an earthquake in Virginia which was felt in New York City. Twitter is exploding with east-coasters experiencing their first earthquake.

Over here at SeatGeek, we were excitedly discussing the tremor when Mike, our trusty sysadmin, realized that our Amazon AWS servers were all in Virginia, right near the epicenter. Did it impact the service at all?

It turns, out, it did. For about six months, we’ve been using a combination of StatsD, Graphite, and GeckoBoard to power a real-time dashboard of some of our system stats. We walked to the front to of the office to take a look, and sure enough, we saw a pretty nasty looking page response spike. 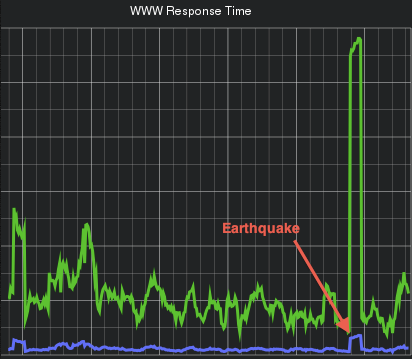