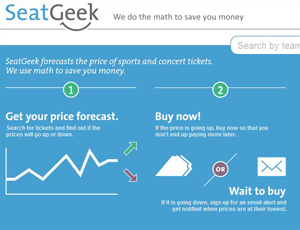 When we launched SeatGeek back in the fall of 2009, we positioned ourselves as a site that forecasts how ticket prices move on the secondary market. That was our “one thing”: forecasts. Russ had spent months building scrapers to collect ticket data. I’d spent months messing with that data in STATA, building models that could accurately forecast prices. We figured we could get traction by helping consumers time their ticket purchases optimally.

Much has changed. The past two years have been all about expanding the vision (trite but true) of what SeatGeek can be. Four months after we launched, we moved from being a price forecaster to a price forecaster that also had pretty good ticket search. The ticket search was getting a better response from users than the forecasts, so we continued to focus on that. Five months after that, we launched our own interactive mapping platform. That really opened the doors on how we could approach ticket search. We created something called Deal Score, which allowed us to use a lot of the data and analytical tools we’d built for forecasts, and that got a great response. In 2011, we added dozens more ticket sellers to our search results. Near the end of the year, we’ve begun to make the leap into being a full-fledged one-stop site for live entertainment.

Through all of this, the forecasting feature has been lost in the shuffle. We’ve continued to support it, but it became a hassle rather than a cause for excitement. Most users stopped paying attention to it; the site had other things that were more compelling. We stopped mentioning it when we described what SeatGeek does. Forecasts ceased to be relevant to our core mission–making ticket buying elegant and simple. Optimally timing a ticket purchase is a complicated, tricky value prop and holds us back in our pursuit of removing complication from ticket buying.

Thus, within the next week or two, we’ll be removing price forecasts from our site. We want to avoid feature bloat. We need to maintain clarity of purpose, for both our users and ourselves. Drop us a line at hi@seatgeek.com if you think this is a terrible idea and if we get enough emails we’ll reconsider. Otherwise, we will begin 2012 without forecasts, which will help us focus on the things that matter most as we try to upend the way people attend live events.